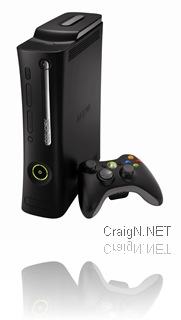 In true Microsoft reactive form, Microsoft South Africa have announced a very significant price drop on the Xbox 360 Elite console featuring a 120GB hard drive. It has been reported in the US that Elite consoles no longer include the HDMI cable, I’m checking with Microsoft South Africa regarding this. What is important though is that the 60GB console is now being phased out simplifying the product line-up to the Arcade, Elite and themed consoles.

Xbox 360 puts all your entertainment in one place so you can play games and watch movies from your Xbox 360, and as announced earlier this year, the Xbox 360 bought today will work with code-named “Project Natal” and controller-free gaming in the future.

“With the Christmas season right around the corner, it’s already time to start looking for entertainment and gifts that everyone will enjoy,” said Chris Lewis, vice president Interactive Entertainment Business at Microsoft Europe. “We have a goal over the next 18 months to reinvent entertainment in the living room and we want to ensure that we have the right foundations in place for our consumers to make simple informed choices around their entertainment platform.  We know that price is a critical influencing factor in consumer choice, but we also know that consumers across Europe are looking for value, benefit and entertainment experiences, so we need to address all these points to continue to grow and be successful in Europe.”

Having an Xbox 360 at the centre of your living room provides entertainment for any occasion. Whether you’re a gamer playing single player or with your friends, you can enjoy hundreds of titles that fit your gaming style. Watch movies, interact with the friends and view photos in the comfort of your home.

Games for everyone. Families and friends can get together to build a famous foursome and relive the music of the Fab Four with “The Beatles: Rock Band.” For those who crave action, players can tear up the tracks of “Forza Motorsport 3”; jump back into the “Halo” universe as an Orbital Drop Shock Trooper in “Halo 3: ODST”; or deploy for combat with this year’s highly anticipated title from Infinity Ward, “Modern Warfare® 2,” the sequel to the best-selling first-person action game in history, “Call of Duty® 4: Modern Warfare.”

With all of these experiences available and the future addition of “Project Natal,” which will work with every Xbox 360 sold today and tomorrow, the Xbox 360 system provides more fun for less.

The price reduction on an Xbox 360 Elite coincides with a re-alignment in the Xbox console strategy across Europe, ensuring that at all price points Xbox 360 represents the best value for money in next generation gaming in each marketplace.  With the premium console of Xbox 360 Elite at a new price point of R3 399 aligned with R2 499 for Xbox 360 Arcade, the pricing structure provides clear choice, differentiation and value at both an entry and premium levels of Xbox 360. The Xbox 360 Pro with a 60GB hard drive will be phased out across South Africa.

So you’re stuck with a 20GB or 60GB console, the good news is that the retail stores should be stocking the 120GB hard drive accessory at around R1600. Note you can only use an original Xbox 360 hard drive on your console due to rights management. Transfer kits are available to help you transfer your content from your 20GB or 60GB hard drive to your new 120GB hard drive.