Today the sessions started bright and early at 08h00 which is way too early if it was work but strangely enough I found myself downstairs devouring the buffet breakfast just after 07h00. I missed attending a few sessions that I would have liked to have attended purely due to logistical issues. I didn’t know where the bloody session rooms were and I left my map in the room and was too lazy to go back and fetch it. 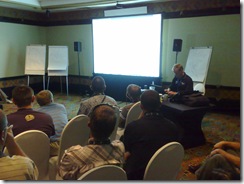 I would have to say that the best session I attended today must have been Pieter’s chalk ‘n talk session on XNA. He spent the morning in the Community Lounge writing a remake of the classic Space Invaders game. Willy-Peter and I however started making a few suggestions and before long the game became BokInvaders with the enemies appearing as English Roses and the ship becoming a Springbok. Oh and to top it all off, the South African national anthem became the theme music. The chalk ‘n talk room had seating for about 30 delegates and was overflowing with delegates sitting on the floor and standing at the back. I believe the talk went down extremely well and garnered a considerable amount of interest in hobbyist game development using XNA Framework targeting Windows PCs and Xbox 360 consoles.

For those that have been to Tech-Ed you will be familiar with the MultiNets. For those that haven’t they are essentially PCs distributed throughout the venue where delegates can logon for free and either plan their schedule, provide session feedback or browse the web. I have got to say that I am not impressed impressed with the Internet access that is provided. I managed to access my Gmail account once throughout the entire day as most of the time it was simply just timing out. I believe that Internet Solutions is providing the outside connectivity and I can only wonder what connection they are running. It feels worse than accessing over a shoddy dial-up. One good thing was that they provided free WiFi access as well, however my mobile phone can’t even connect to the access point as it doesn’t stay up for long enough. C’mon guys, get with it.

In general the day was awesome and I really enjoyed Louis de Klerk’s talk on the new features of SQL Server 2008, code-named Katmai. I have been playing around with CTP4 and I can’t wait to get hold of the new CTP5 that adds spatial support. Its rumoured that CTP5 might drop before the end of next week. I can’t wait.